Once again the spring season is upon us and we are doing some cleaning, growing and creating.

You may have noticed the NotRock website has continued to refine itself in hopes become a more streamlined interface, making navigability easier and more efficient.  The catalog page has been reworked for the better and will become more in depth for each specific release as time goes on (one step at a time here people, sheesh).  In addition to the catalog overhaul there is now a SHOWS page that will keep constant listing of booked shows for all active bands on the NotRock roster.  It is updated frequently so be sure to check it multiples time a day.  Also recently constructed is the BANDS page which serves as a directory for all NotRock bands/affiliates past and present, linking directly to each individual band's profile page subsequently steering the user toward whatever content they wish to find about said band.  Give it a whirl.  We paid top dollar for all this new design so check it out. 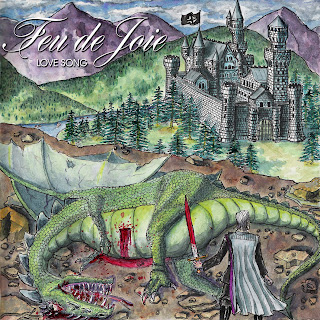 Aforementioned in the previous month's post, digging around the NotRock archives  has yielded a "new" old release to the NotRock catalog.  Faithful NotRock followers/enthusiasts rejoice and welcome NR-033 Feu de Joie: Love Song to the ranks of the ever growing NR releases.  A mere single tune Love Song is very much a lost treasure and we deemed it worthy of it's own catalog number.  As for now it is available in the digital format accompanied by a spanking new illustration by John T. Fisher.  A very limited run on  CD is being developed with some snazzy packaging (the likes of which only F.D.J. would dare attempt) and will include four bonus F.D.J. demos.  Stay tuned for updates on that front. 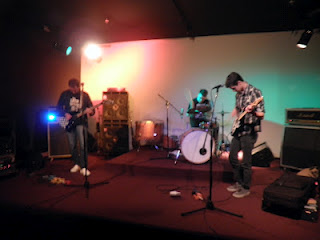 It seams that amongst all the usual commotion in these parts, out of practically nowhere a new band has germinated past seed and broke ground into the NotRock garden.  If you've been to the band page directory you may have already noticed an unfamiliar and possibly controversially named band listed.  We at NotRock would like to take this opportunity to formally welcome to the team and introduce to you: COURTNEY STODDEN AGE SIXTEEN.  Comprised of Joe DeGroot, Brian Foy, and Kyle Wilkerson C.S.A.S. delivers a blast of gloom rock ambience that hasn't existed since the best days of UNWOUND.  We are thrilled with the songs they are playing at their live shows and are equally thrilled that they will be releasing their full-length debut on NotRock in the coming months.  Expect many developments as we follow this new band and the release of:
NR-034 Courtney Stodden Age Sixteen: In Labored Lockstep.

In a brief overview of other active NotRock projects we'd like to update y'all on the following:

Insouciant moves forward with their forthcoming LP by COMPLETING tracking guitars!  All major instrument tracking is now done leaving the band with the task of recording vocals.  If all goes well that will wrap up in the month of May.  Who knows, you may see this release this summer.

Please Exist also continues progress on their full length.  Instrument tracking is done.  A vigorous mixing session is underway and as soon as some vocals are laid down, the general public may actually get to hear it.  Cross you fingers people.  You are a little bit closer to having this record explode your stereo.

As you know Khantra's beloved Self-Titled album is getting a special 10th anniversary rerelease.  The track assembly is complete and details are being worked out on the packaging presentation.  It may be another treat to drop this summer. 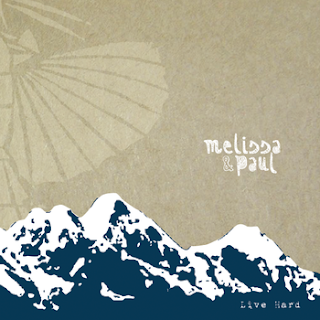 In closing we'd like to talk about some dear friends of ours.  Chances are if you're reading this you already know about these crazy kids called Melissa & Paul.  I dare say more people know about them than the entire NotRock operation and not without good reason.  Since you already know this, there's no reason for us to tell you how awesome they are or how fun and energetic their live show is or how much their music well... rocks.  However in the slightest teeny weeny chance you don't know about this already you absolutely need to.   On friday April 13th Melissa & Paul released a 10" record entitled  "LIVE HARD".  If you don't have it already GET IT.  We could go on ad nauseam as to why this record rules but just trust us and pick up a copy.  Keep doing what you're doing M&P.  We are proud to call you friends and thrilled you're making this music.


Well that's all the news fit to print this month.  See you in May kiddies!  (yes we realize that's a day away. sorry this months post was delayed)
- J.T.F.

P.S. Who would win in a fight Mr. Fantastic of Stretch Armstrong?
at 11:17 AM