First off we must apologize for two reasons: 1) because we apparently can't make it through one calendar year without having extended  gaps in our news updates.  You'd think it wouldn't be so difficult to keep up with that.  12 posts a year shouldn't be a problem and yet our last post was in July.  2) despite the fact that we haven't had an update in months and the fact that we really do have a lot of exciting things to write about and share with you, this post is not going to cover much and will be very brief.  The main focus of this mini-post is this... 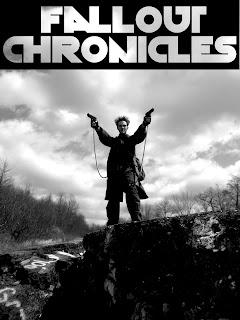 For those of you that don't know, John T. Fisher has been making an epic, post-apocalyptic, sci-fi, film serial called Fallout Chronicles over the past few years. The exciting news is that Fallout Chronicles (which stars many a NotRock artist) has been accepted into and will be screening at the Terror Film Festival in Philly on October 18th.  Both the Prologue and Chapter 1 will be shown together along with other submitters short films.  In addition to being an official selection, Fallout Chronicles is also nominated for several CLAW AWARDS including best director, best sci-fi short, best actress (Liz Norris), best cinematography, best editing, best sound design, and best special FX!  If you can come out and support we'd all appreciate it very much.  If you buy single program tickets online they will be $5. They're $10 at the door the day of.
Here's a link to the facebook event page.

We hope to see some of you there!


Ok unfortunately that's all the news we can squeeze in at the moment but we promise there will be another update really soon that'll be flooded with exciting news.  Until then, keep it real.  We hope to see you at the festival!