October's just about wrapping up and before it does we have some last minute news items to satiate your eager tastebuds.  Pull up a chair and put some popcorn in the hopper. 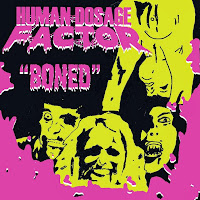 Surprise!!! Human Dosage Factor dropped an new EP and NotRock has the honor of releasing it!  Out of all our releases over the years we've never had the pleasure of adding anything death metalish to our catalog.  Dare I say we've never had a reason to...  UNTIL NOW!  NR-044, HDF's second EP "BONED", is a 6 song onslaught of blast beats, chugging, scorching guitars, and crazy deep guttural vociferations that makes our aiwa boombox walk across the desk it's on.  Guest appearances of Jillian (IDES) on backing vocals and Adam (Off Camber, Khantra) with a killer guitar solo, hit this release out of the park.  It is available for download now with a CD on the way.  Check it out! 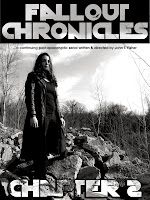 On Oct. 17th the second chapter of John T. 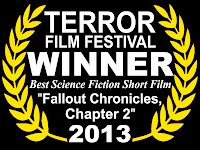 Fisher's FALLOUT CHRONICLES premiered at the 2013 Terror Film Festival in Philly.  It was received very well and much to John's surprise it won the festival's award for BEST SCI-FI SHORT!  After a couple small fixes Chapter 2 will up online for your viewing pleasure.  Chapter 3 is currently in the final stages of post-production and Chapter 4 is not too far behind that.

Our buddies at Beta Snake Records have been putting out great records and compilations for the past 5 years.  Currently all their compilations can be found on their bandcamp page and other releases as well as distro items are available on their main page.  Currently they are running an exclusive mail-order singles club that is super neat and is something that is not to be missed. The next single in line with two brand new exclusive recordings is... 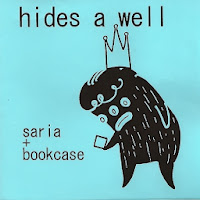 Hides A Well!  The only way to get this hot new single is to sign up for the singles club here.  By doing so you'll get to cherish two exclusive recordings of songs "Saria" and "Bookcase" but sign up soon because there's only a limited amount and they're going quicker than hotcakes at a Sizzler breakfast buffet! In addition to that wonderful tidbit Hides A Well will also be releasing a 4 song maxi single "Temporary Tattoos" as a companion piece to their recently released "From A Safe Distance".  Expect that in the next month or two in addition to the physical release of FASD.  Meanwhile production wrapped on their first music video and is currently being edited by John.  Still on the way is the split Ukelele EP with Disseriph. There was some unexpected hang ups with that one but it'll be released  soon we promise.  Hopefully we'll have much more on that next month.

Next on the news ticker: COMPILATIONS! That's right that's plural.  As you know NotRock Sampler Volume 4 is well under way.  As soon as a couple tracks come back from the mix/master plant physical  production of the sampler CD will begin.  However the process and release of this new extra expansive volume has taken longer than anticipated and it will unfortunately be put on the back burner for the next month as we rush into production on the newest installment of our annual Holiday Compilation.  In order to get that released in time for the coming holiday season most of our production time and resources must be dispatched to that project.  Work on Sampler 4 will resume mid December once the Holiday Comp is finished and done with.  So for now the Holiday Comp is slated with a tentative (digital) release date of Dec 1st.  Volume 4 of the Sampler should hit the streets in mid January (digital may come sooner).  Anyway we apologize for the delay of the much anticipated new Sampler but until someone starts paying us copious sums of money to release records we will continue to juggle projects how we always have. 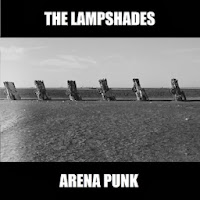 Ok we're total doofuses for not mentioning something so fantastic last month even though we absolutely meant to.  Legendary Pittsburg based band the Lampshades have blessed the planet by releasing a new EP "Arena Punk".  It contains 4 songs of indie-rock awesomeness.  Do yourself a favor and  pick it up/download it immediately.  NotRock is so happy that these fellas are back at it again and even more stoked that they are creating and releasing new music.  Hopefully they have much more in store for us.  If you missed out on their other great release of yesteryear "The Lampshades Are Alright" you should absolutely pick that one up as well! 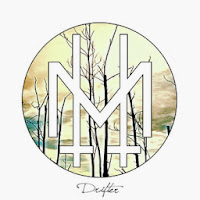 Well if one thing has been made clear in the short time Hell Mary has been a band it's that they are a group of hard working dudes.  They're constantly out playing shows and now less than a year from the release of their debut record they've unleashed "Drifter" their second EP of 6 songs.  Much like FOTF "Drifter" packs a serious wallop.  Maybe even more so and that's really saying something  because their first EP was like an A-BOMB going off on our stereo and in our eardrums.  The songs on the new EP are more developed, more focused, and there's a sincere anger that comes through with the playing and vocals that has been missing from anything in the hardcore cannon for a long time.  The lyrics can easily push this to be the poignant hardcore record of the year if not decade.   Ratings are for chumps but if we did use them this would be a five for five record.  Get at it immediately.
Be sure to make it out to their record release show with Off Camber and others! 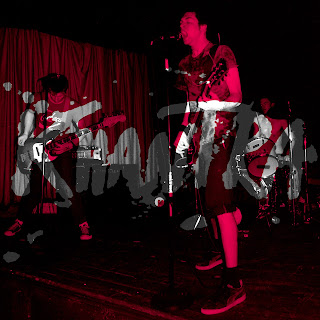 ..and finally,  we were waiting to launch this gem digitally until we had a nice little physical package to put together but it's been a process that unfortunately amongst all the other projects and releases we've not  been able to devote much time to.  The clock has been ticking away and we're getting farther and farther away from what would've been it's tenth anniversary so what the hell... without further adieu enjoy the 10th Anniversary of Khantra's Self Titled release.   This edition is complete with all the original album tracks as well as a compilation track from that era, four alternate demo versions of some songs, and the crowning jewel of this release; two previously unreleased b-sides from the Self-Titled session at Portrait Recording Studios.  The two b-sides were originally not included on the record because it was decided they were not as mature as the rest of the material of that time.  Having said that, they are a great testament of the era before S/T, of who Khantra was before then and where they came from musically.  We hope your ears enjoy these treasures as much as ours did when we unearthed them from the archives.


Well that'll be all for this month.  See you back here in 30!  In spirit of the season we'll leave you with this halloweeny movie that John made back in college.  Enjoy!