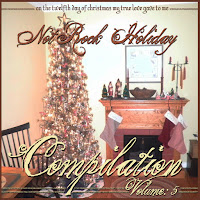 We have a short update for you this month as we swing into full gear for the holiday season.  Hopefully you've all survived massive turkey/pie intake.  Currently John is rolling around the floor griping his belly as he tries to photoshop  disc art.

Speaking of which, this years Holiday Comp, which is the 5th in our annual series is just finishing up some final steps and should be released into the ether tomorrow(Dec 1st)! Although there are not quite as many contributors as last years edition, this one still packs a wallop of holiday wintery goodness. CLICK HERE the link should be active by midnight Dec 1st. The CD will be released later in the month with an official release show on Dec 20th. More on that next month!

Our next tidbit of news we have is some recently unearthed treasures found deep within the NotRock archives.  First up...

Enjoy these two Do Nothing Machine demos from back in the day.  These were recorded circa 2001 to a Tascam 4-track cassette recorder back during the very beginnings of that band.  They have never seen the light of day until now!

Next up is a fabulous rerecording of Graystone's "Static Fog".  This song was rerecorded during the sessions for their full length masterpiece "The Harm" and was intended to be used on a compilation that ended up never coming out.  So it sat for the last few years in the archives until now! Enjoy this gem!!!


Ok kiddies that's all the news fit to print this month.  We'll see you back here in Dec. with much more info about the Holiday Comp release show as well as the progress of the long awaited NotRock Sampler Volume:4 and perhaps a few more surprises.  Until then take care, enjoy your holidays,  and be kind to one another.  As we part we will leave with a video snip-it of a recent Off Camber show where half the band was sick so instead of completely bailing Adam and John just played a few KHANTRA tunes instead!