May has nearly passed us by and while much has occurred since our last post, there isn't too much to show for it... yet. 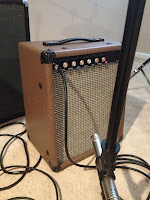 It's odd that at this time last year we were posting about Insouciant throwing in the towel and now they are just about ready to grace us with a brand new EP.  All the recording has been completed and the mixing is in it's final stages.  NR-040 is just around the corner.  Expect more official news in next months post.

The Hides A Well, Disseriph Ukelele split is in production mode now and will be released in time for Hides A Well show on June 16th.  Meanwhile they continue finalizing their debut full length which is due out sometime this summer.  Also in production is their first video which is to feature epic battling with cardboard weapons.  There are also some compilation appearances in the works including...


Not Rock Sampler Volume IV is in production now. We've reached out (well we're still in the process)   to many, many bands, and musicians  this time around.  We really tried to extend our reach with the contributors on this comp to hopefully provide the largest most eclectic mix of music released by NotRock thus far.

Please Exist has resumed working on their first full length so hopefully that much anticipated record will see the light of day of these days.  They are also finishing up the batch of songs that will be included on their second full length which they intend to begin tracking over the summer.

Hey check out this video of OFF CAMBER from about a year ago at the Meatlocker.  It sounds awful but looks pretty neat.


It seems that is all the news fit to print this month.  Hopefully June will see us posting about records actually being released.  Until then be kind, go to shows, and support independent business and art.

P.S.  We just caught the band CENTURIES the other night while they were on tour from Florida.  Their live show produced a wall of sound assault that would make Phil Spector quake in his jail cell. Highly Recommended!!!  Check them out immediately.
at 1:51 PM