Happy Holidays everybody!  We hope the season has been treating you all well.  Here's a brief last minute post to round out the year. 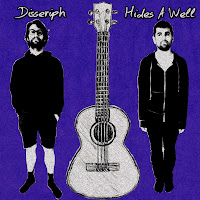 Finally available for your listening pleasure is  the Disseriph/Hides A Well Ukulele Split.  Sporting four tracks (two from each band) this little gem has a run time of less than 12 minutes but we assure you it is worth every second!  It is currently available for digital download and the CD will soon follow.  On the subject of Hides A Well, their debut full length CD, "From A Safe Distance" is finally available and will be having it's proper release show on January 17th.  The CD will also be available shortly from the NotRock Records Shop.


On a less good note Off Camber is ceasing to exist and will be playing their farewell show on Friday January 10th in Bethlehem PA.  A final recording will be made of their undocumented material.  Adam, James, and John will continue playing and creating music together as a new band called ENTIA.  Rumor has it they've already got a show lined up in February. More details on that in 2014!


The Lies is a new band on the scene that seem to be moving at breakneck speed with several shows lined up and an EP already available for you listening pleasure.  Check them out!!!

Merry Christmas to us!  Our pals in Hannibal Montana just released a new EP and it's just as amazing as we've come to expect their records to be.   Please do check it out and enjoy it's rocking mathy  awesomeness.

That's all we have for you this month.  There'll be plenty of exciting stuff happening in 2014 so stay tuned for that! As we close this year we say thank you to all who have supported us and checked out what we do.  We'll leave you with the recently released second chapter of John's award winning Fallout Chronicles Film Serial.  There's lots of appearances from many NotRock musicians and others from the local music scene.  Check it out and share with friends.  Here's hoping you've had a fine holiday season and will have a most excellent 2014.  Take Care Friends.
- J.T.F.

But it is truly pretty easy, as a result of|as a outcome of} the readers of a website site|a net site} called VPFree2scout out the best 클레오카지노 machines and publish their places on the positioning. Using that website you may see that there is slim pickings on the Strip for 9/6 Jacks or Better besides at very high minimums. To discover the good machines at lower limits, you need to|you must} go downtown or to a locals casino , or play online at a casino like Bovada, which has offered 9/6 at low limits for years.